Bats can become a serious problem to humans due to the transmission of diseases; while they have an important role in the ecosystem, you certainly do not want them to live in your building or attic; or make their home in your chimney. Due to health risks associated with bats, it becomes indispensable knowing how to keep bats away.

Even though bats are quite necessary as pest controllers and pollinators installed in your attic or somewhere else in your home, they can cause some huge problems. In addition to the odor caused by bat droppings, a colony of bats may even end up tearing up your home.

Dealing with bats at some point is a common problem, so the best thing you can do is to educate yourself; this way, when the time comes, you will know exactly what to do and what not to. And today, you are in luck because we’ll be sharing with you everything you need to know on how to keep these Chihuahua faces with wings away, different methods, tips, tricks, and more.

In this Article hide
How to Keep Bats Away & Bats FAQ’s
Where should bats be allowed to live?
Why let bats live on your property?
Are bats aggressive?
What areas in the house are protected from bats?
When is the best time to get rid of bats?
When is a bad time to get rid of bats?
Why do bats screech?
What are some bats predators?
Why are bats attracted to your house?
How to keep bats away
Bat net
Bat house
Remove any food sources
Employ a bat cone bat deterrent
Use mothballs
Use aluminum foil
Natural ways How to Keep Bats Away
Essential oils
Practice exclusion

How to Keep Bats Away & Bats FAQ’s

Where should bats be allowed to live?

While it is completely understandable not to want bats to congregate in places like your attic, there are some places, such as an old barn, a hollow tree, or other areas on your grounds, that are suitable places to allow bats to live. Keep in mind as well that killing bats are against the law, in most areas at least.

Why let bats live on your property?

Among the reasons you may consider not trying to get rid of bats from your porch is their fantastic bug control. A single bat can eat up to 1,000 insects in an hour. Bats can handle between 6,000 and 8,000 insects a night.
Bats are cave dwellers; they can also dwell inside hollow logs, storm drains, under bridges, etc.

Typically bats are good neighbors; they are not aggressive to humans unless threatened and trying to get away. They generally don’t bite humans. They go out at night to search for food for themselves and prefer to stay inside during the daytime. However, their presence can be easily felt and can be quite disturbing.

What areas in the house are protected from bats?

When is the best time to get rid of bats?

When is a bad time to get rid of bats?

The fall marks the start of the year when it is quite complicated to kick bats out of an area. And eliminating bats in the winter is even more difficult because bats usually hibernate during this time, so it would require physical moving and a way to relocate bats to a safe place.

Why do bats screech?

The correct term would be echolocation. It is a type of sonar that allows bats to shriek and listen for the echo. This is their way to navigate at night to avoid objects and locate food.

What are some bats predators?

Bat predators include hawks, owls, raccoons, and even snakes.

Why are bats attracted to your house?

Bats come around your garden, backyard, or attic likely because they are trying to hide from their natural predators. Another reason is, of course, food supply. Most species like to feed on moths, beetles, and mosquitoes. They also eat plants such as bananas, mangoes, dates, etc.

How to keep bats away

Check out different methods to keep bats away from your property.

Installing a bat net is a good idea to keep bats away. A bat net is best used to cover a big hole or several small ones located near each other.

Identify entry points.
Estimate the size and cut the bat net if necessary.
Secure the top corners a few inches above the entry points, and allow them to hang down.

Bird Barrier StealthNet is a good choice. It is designed to blend into any open structure or building architecture as it can become almost unnoticeable from a distance. Find it on Amazon.

Installing a decoy bat house will keep bats away and stop them from coming back. The trick is to fool them into another place instead of taking yours. 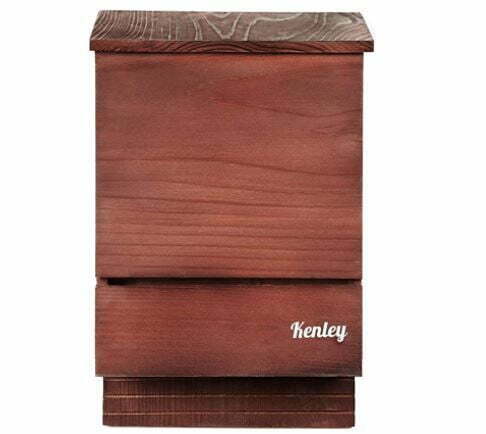 Kenley Bat House – Outdoor Bat Box Shelter is a popular option. It has been developed using available research on bat preferences and needs. The specially engineered interior and exterior perches make it easy for bats to land and roost. It is a large bat box with two chambers; the external dimensions are 15″x9.2″x3.2″. Find it on Amazon.

If you don’t want to attract any bats to your home, the first thing you need to do is to get rid of any of their favorite food. Some bats eat insects, some bats eat fruits, while the majority eat a mix of both. If you see that their favorite food is growing or flying around in your garden, it’s time to make changes.

To prevent access, you may want to have fruits in your garden covered with bird netting.

The trick behind a bat cone bat deterrent is to allow bats to fly out but prevent them from flying back in. This square tube is made of heavy-duty plastic. The base is outfitted with holes for easy installation. 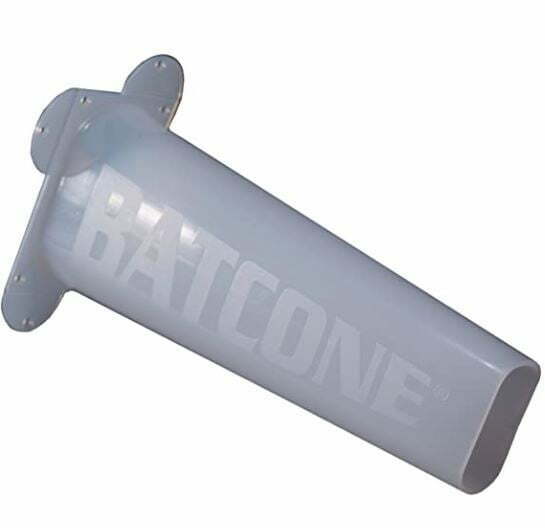 This Batcone II Reusable Bat Exclusion sounds promising. The Batcone II Excluder is designed to allow bats to exit a structure (attic, garage, barn, etc.) but will not re-enter. It is 6″ long, with four flexible tabs at one end to attach the excluder over the bats’ entry/exit point. Find it on Amazon.

Mothballs have proven effective in keeping bats away because the solid form of naphthalene turns directly into vapor in a process called sublimation. Naphthalene, which is toxic to moths and other insects, causes vomiting, dizziness, and nausea in bats, but it is only lethal in extremely high amounts. Mothballs are recommended to use in small spaces. 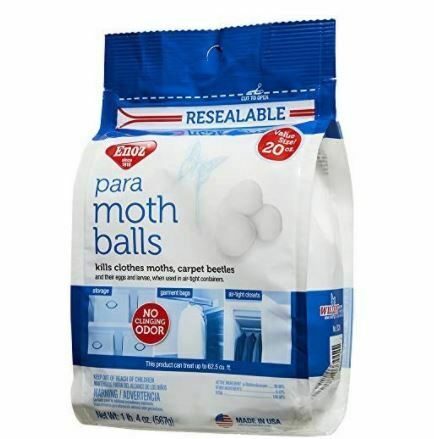 Bats and most animals get scared at flashes of light. Bursts of bright light will make bats disoriented and irritated. Aluminum foil is a cheap way to fight against bats. Its reflective surface and crackling sounds make it a good bat repellent.

What you want to do is hang strips of foil or foil balls near the entry point to the bat colony’s home and allow them to catch the light of the outdoor lamps.

Natural ways How to Keep Bats Away

Essential oils such as Peppermint and Eucalyptus are not preferred by bats. You can spray a mix of Peppermint oil and water in your home to keep bats away. Eucalyptus smells also repel them, use a mixture of this oil with water and spray it around your home.

Since bats do not depend on people for food, the best you can do to avoid them is to make your place unattractive to them.
This technique requires sealing every entry and exit point that bats use inside an attic or another part of the home. Be sure to do an exhaustive inspection of the area and once you have a record of all possible holes, work to exclude bats from entering that specific space. To cover the holes, you’ll be needing of wire mesh to cover them.

Search your Next Home Remedy

fresh recipes delivered to your inbox